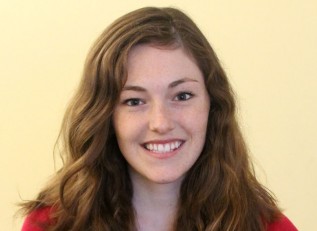 Elizabeth Feldeverd of Oak Park, Minnesota was selected as the winner of the 2012 BBG Communications Scholarship. Below you can read what Elizabeth submitted.

In late December 2010, Mohamed Bouazizi of Tunisia lost his job after a policewoman confiscated his vegetable cart. Out of shame and anger towards his government, Bouazizi turned to self-immolation. Ten days after his highly publicized death, Tunisiaâ??s dictator had been removed from office.[1] Bouaziziâ??s death marked the beginning of what has been dubbed the â??Arab Spring,â? but the regionâ??s desire for democracy had been brewing for decades. However, activists under an austere regime finally found the key to a successful revolution: smartphones.

The world watched as hundreds of thousands of young activists each shared 140 characters of anti-establishment commentary via Twitter. Despite changes of power in Tunisia and Egypt, the push for democracy continues. Social media has been crucial thus far, but how activists are accessing these websites has proved to be far more critical. Smartphone technology has enabled rapid and successful organization. While Americans may have been idly â??tweetingâ? petty topics such as what they had for breakfast, Tunisians, Egyptians and other Middle Eastern citizens are using social media to organize, rally, and revolutionize. They are using their smartphones to unite other protestors across town and across borders.

The role of smartphones during the Arab Spring should not be underestimated. While social media gave activists the ability to connect, smartphones gave them the ability to mobilize. University of Washington communications researcher Philip Howard found that, during the uprisings, â??Twitter provides a window into the broader world of digital conversations, many of which probably involved cell phones to send text, pictures or voice messagesâ?¦Almost everyone has access to a mobile phone [in Tunisia].â?[2] Through smartphone technology, activists can post a video to YouTube, send a tweet, or update their blog while away from their computer. The ability to mobilize and share information in real-time has been a fundamental part of the revolutionâ??s success.

What has made smartphones an integral way of communication for people around the globe is their software. Applications, better known as â??apps,â? separate smartphones from their primitive predecessors now known as â??dumbphones.â? Apps can be built-in or created by a third party, allowing for virtually endless ways to share, entertain, inform, and communicate. Types of apps available include touch-screen games, streaming videos and movies, interactive digital magazines, and credit card-scanning software. Such apps can be used to organize something as momentous as a democratic revolution or as mundane as a weekly work schedule.

Only ten years ago, this sort of inclusive device wasnâ??t available. Early mobile phones, albeit a landmark of communications technology in their own right, were limited to one function: making phone calls. Over time, text messaging became standard on mobile phones, which allowed for fast and convenient conversations. Other devices like PDAâ??s (personal digital assistants) and MP3 players could organize and entertain, but like the cell phone, their scope of functionality was narrow. Busy white-collar workers would have to cope with a clunky and inconvenient number of devices. If someone in the late 1990â??s wanted to bring with them the same features as a smartphone, they would have to drag along several different devices to match the capabilities of todayâ??s mobile technology.

Modern smartphones have turned the personal device market on its head. Within the past few years, hardware and software engineers alike have sought to consolidate. All advancements in mobile phones and handheld devices have led to what is (as of today) the pinnacle of communication technology. Today, consumers can purchase a sleek and speedy smartphone to simplify nearly everything we do on a daily basis. In fact, there are few things you canâ??t do with a smartphone. No, your iPhone canâ??t do your workout for you, but it can be used to watch instructional videos and keep track of calories. Unfortunately, your Android canâ??t cook you a gourmet meal, but it can suggest top-rated restaurants in your neighborhood to suit your taste buds. In less than a decade, mobile technology has evolved from marginally functional to nothing less than a computer in your pocket.

With so many available apps, smartphones are quickly replacing and outdating once-coveted devices. Portable video camcorders and digital cameras are now standard on mobile phones, and top-of-the-line models often surpass their standalone counterparts in quality. Many smartphones are now equipped to store music and stream live radio, slowly making MP3 players obsolete. Several of the latest smartphones include high-definition video recording and state-of-the-art cameras. The streamlined, all-in-one philosophy behind modern mobile technology may end up being the demise of several single-purpose gadgets.

On the other hand, smartphones have opened the door for other technological innovations. Every major computer brand has their version of a portable touchscreen device known as a tablet. Essentially, tablets are oversized smartphones that canâ??t make phone calls. The use of downloadable apps has spread from smartphones to other gadgets; a range of products from printers to minivans now include app-like software.

Leading smartphone makers are touting record data download speeds, better cameras, and sharper displays. In the not-so-distant future, consumers will be able to buy smartphones with science fiction-like features. How these features are used is not up to the seller but the creativity- and even audacity- of its users. The potential hardware and software changes to future smartphones will further change how we communicate with our friends, families, and fellow revolutionaries.

Essay #2: Why do you think a College/University education is important?:

After getting dumped by his girlfriend for acting pretentious, a Harvard underclassman drunkenly blogs about his rejection. Hours later, a computer programming algorithm now known around the world is scribbled onto a dorm room window. Sound familiar? It should. The award-winning movie â??The Social Networkâ? tells the sensationalized story of entrepreneur and college dropout Mark Zuckerberg. Zuckerberg, one of the worldâ??s youngest self-made billionaires, co-founded Facebook after leaving Harvard in 2004. Initially, it might be surprising that anyone could make that much money so young, especially without a college degree. In reality, however, heâ??s far from the first person to catapult themselves into â??the 1%â? without a post-secondary education.

Some of the most successful entrepreneurs never completed a college education. Richard Branson created the Virgin brand, which includes Virgin Mobile and Virgin Galactic, after dropping out at age 16. Ralph Lauren, world-renowned fashion designer, also skipped out on the university experience. The second richest person in the world, Bill Gates, dropped out of Harvard, perhaps even setting an example for Zuckerberg. Despite not having a college education, their careers have been astronomically successful. Itâ??s tempting to dismiss college as unnecessary and outdated when such businesspeople have made millions- even billions- without a formal education.

Simply put, these famous entrepreneurs got lucky in two ways. First, they were blessed with exceedingly above-average intellect; second, their ideas were not only innovative, but possible with present technology. These geniuses are the exception, not the rule. Louis Pasteur, a revolutionary 19th century chemist, is quoted saying, â??chance only favors the mind which is prepared.â?[1] For those not blessed with off-the-charts intellect, we have to take deliberate steps to set ourselves up for success. A college education not only prepares you for an existing career, but gives you the tool to begin down a new and innovative path.

More important than natural intelligence is curiosity. One could argue that curiosity is the source of other virtues, such as perseverance and a strong work ethic. Famous cosmologist Carl Sagan wrote in his best-selling novel Cosmos that â??the surface of the Earth is the shore of the cosmic ocean. Recently, we have waded a little out to seaâ?¦The water seems inviting. The ocean calls.â?[2] This quote conjured up my interest in astronomy and consequently aerospace engineering. After getting my undergraduate degree in mechanical engineering at Cornell, I plan to pursue a graduate degree at a top research institution in aerospace engineering. Ultimately, my goal is to develop environmentally sustainable human spacecraft.

To me, college is the only way to gain the knowledge and skills to make my dreams a reality. Needless to say, I would be clueless as to how to build a rocket or satellite without extensive math and science courses. My aerospace engineering predecessors certainly didnâ??t get a man on the moon without a diploma. The value of a college education isnâ??t limited to engineers. I wouldnâ??t trust a surgeon who had never graduated from medical school, nor would I want a lawyer that couldnâ??t pass the bar exam. Leaders of every profession and field got their start trekking textbooks across campus. In fact, every president in the last century other than Truman obtained at least an undergraduate degree.[3] Itâ??s hard to imagine an American presidential candidate making it past the primaries without a formal education.

Itâ??s not all about innovation, though. Years of outsourcing jobs to developing countries has morphed America into a country less reliant on manufacturing. Because the United Statesâ?? economy has shifted its focus, so must its educational priorities. From an individual perspective, a degree is vital to a secure financial future. According to the Bureau of Labor Statistics, a higher degree corresponds to a higher salary. Furthermore, those with advanced degrees had substantially lower unemployment rates; the unemployment rate of workers with bachelorâ??s degrees was nearly half that of high school graduates.[4] While the up-front cost of a post-secondary education can seem daunting, it is certainly not as grim as a low-salary or potentially jobless life sans degree.

The 21st century has been fraught with crises: global economic decline, climate change, and tragic rates of poverty have forced unprecedented challenges upon our current leaders and intellectuals. However, those in charge are, quite frankly, getting old. We cannot leave it up to chance, as Pasteur would stress, by deeming a college education unnecessary or outdated. These increasingly complex issues will be solved by encouraging young students to hit the books while using their curiosity to innovate. It is paramount that young adults are prepared to take the reins. And whoâ??s to say they havenâ??t already?


Alexandra Hosack of Lethbridge, Alberta was selected as the winner of the 2015 BBG Communications Scholarship. Below you can read what Alexandra submitted.